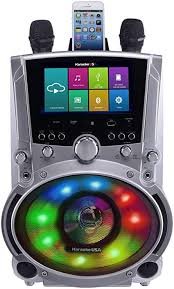 The WK760 is a machine like no other! This is where karaoke meets the internet in a huge way. It will play your MP3G downloads on USB Flash drives or SD Card, stream live media from popular sites like YouTube and many more, and stream from your mobile smart phone or smart devices with Wi-Fi. But it doesn't stop there! Taking advantage of the android OS, you're able to install thousands of apps from Google Play Store or similar sites. If you've had any exposure to mobile phones and installing apps you're going to be right at home with this incredible machine. Just a few clicks and you open your entertainment experience to limitless possibilities! A Touch Screen makes navigation easy and intuitive just like your phone.

Trying to describe how apps can enhance your use would be exhausting. For karaoke, imagine signing on to specific karaoke apps for most any language in the world. How about entering global karaoke contests or social groups? Basically, what you can do with an app can be done on this machine. A global event right in your living room? Why not?

Even if you're a bit intimidated by technology, apps and smart devices you can still have a traditional great time. Load your songs on a USB Flash drive or SD Card, plug them in, then sing and record with the touch of a couple buttons. Light enough to take to your favorite gatherings and flexible enough to satisfy the tastes of all your guests. They can connect and play their songs as well.