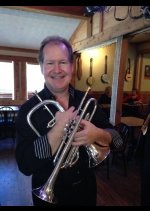 Education
David started his musical career in the 5th grade upon the viola and began playing trumpet while in high school. After receiving a music scholarship and graduating from Furman University in Greenville, S.C.with a BA in Music, he settled back in the metro Atlanta area to start his career in music.

Experience
He is an active freelance artist in the Atlanta area playing for many live venues and bands and can be found in many Atlanta area recording studios. David has played for many well-known recording artists including: Aretha Franklin, Olivia Newton-John, Johnny Mathis, Brian Wilson(Beach Boys), Shelia E., Babbie Mason, Dave Boyer, Avalon, and New Song. David also tour for 2 ½ years with the contemporary Christian group TRUTH. He and his wife Lisa run a musical contracting agency called Love Notes that provides musical consultation and music/musicians for wedding ceremonies, receptions, and corporate and private functions. David is very involved in the church community in the metro Atlanta area as a guest soloist and a Master Class clinician for many area middle schools and high schools in Cobb and Fulton County. In 1989 David and his father-in-law started an inter-denominational ministering orchestra call His Symphony, Inc. From that organization, David started the Victory Jazz Orchestra, an 18 piece big band that performs in and around the Atlanta area. David is called upon to play lead trumpet in many Atlanta area big bands including the Modernaires, The Atlanta 17, the Sentimental Journey Orchestra, Joe Gransden’s Big Band, Big Band Atlanta, and Little Big Band Atlanta. David was on staff at First Redeemer Church in Cumming, Ga., Dr. Richard Lee, pastor, as the Instrumental Director from 1998 - 2007. From 2007 - 2009, David started as Director of Instrumental Music at a new church, Crown Pointe Community Church in Kennesaw, Ga. From 2009 -2013 David was the Instrumental Director at Eastside Baptist Church in Marietta, Ga.

Objective
To give my students the technical skills and basic musical ideas to master their instrument but also remembering that music is about enjoyment. I encourage expression and creativity and encourage my students to do find their own personal "sound".

Availability of David Klausman
Don't see the time you want? Let Us Help You!